How to make an origami Lotus Flower Dıy Tutorial Video 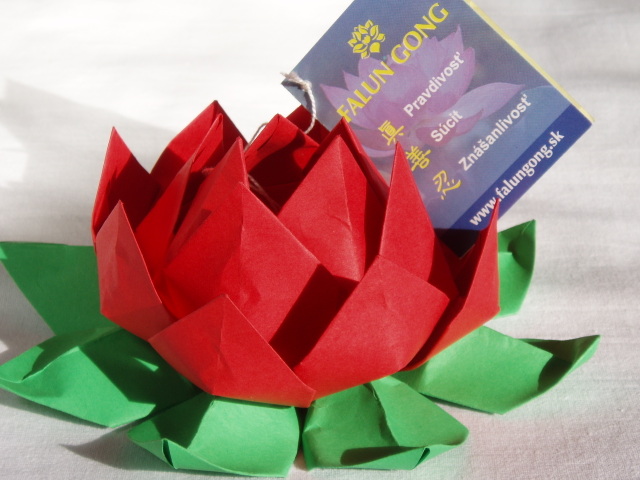 How to make an origami Lotus Flower Dıy Tutorial Video

How to Make Origami Lotus Flowers

How to Make Origami Lotus Flowers

(Clearwisdom.net) Folded paper lotus flowers are simple to make. Falun Gong practitioners give them to others as a symbol of the practiceâ€™s beauty and purity and the principles of Truth, Compassion and Tolerance.

Making and distributing the paper lotus flower is part of the global Petals of Peace campaign for kids as well. By distributing the flowers, practitioners let others know about innocent children and families that are affected by the brutal persecution of Falun Gong in China.

To make a folded paper lotus flower you will need the following:
colored paper, stout string, and a Dafa bookmark. A piece of paper with a message you’ve written on it can be substituted for the bookmark.

Colored paper preparation:
Cut 12 pieces of 13.5cm X 7.5cm colored paper rectangles. An A4-sized page should be precisely enough to make six. The size of the pieces can be altered proportionately according to the desired size of the lotus.

Eight of the pieces (for illustration purposes letâ€™s say theyâ€™re red) are used to make two-part petals and the remaining four make the four-part (green) petals.

How to fold the petals:

Fold the paper pieces in half, parallel to the longest edge. The four corners are folded as if making a boat. Then the two longer edges are folded inwards and the paper is folded in half (as shown on the first photo). Repeat the same steps for all eight (red) papers. You should end up with all the necessary petals.

How to fold the leaves:

Folding of the leaves is actually quite similar to folding the petals. Once youâ€™ve reached the stage illustrated in the fourth photo above, simply fold the two outer edges to the middle (as shown in the second photo). Then fold all four (green) papers in the same fashion. Now you have the necessary leaves.

Folding the petals and the leaves:

With the leaves complete, place the petals on them. The second petal should completely cover the first petalâ€™s four corners (see third photo). In the same way, add the remaining petals to the leaves. Four petals with leaves should be left. These four petal-leaf clusters are placed next to each other and held together with string at the center (see fourth photo).

The flower petal-leaf clusters are folded in eight directions (see fifth photo). Begin by folding the flowerâ€™s first layer. Do this by folding the highest standing paper petals as shown in the sixth photo. How high the paper is folded depends on the individual. The flower can be made taller or flatter.

Continue folding the petals. Once the first layer is complete, the second layer can be added (see seventh photo). With the second layer of petals folded, the leaves can then be folded out. Each leaf is folded carefully using oneâ€™s thumb and index finger (see eighth photo).

A bookmark or personal note can be attached to the finished lotus flower. Donâ€™t forget to make it a positive message, because thatâ€™s the only way the flower can carry a beautiful and precious meaning.