Home » Knitting Tutorial » Hoo are you?… and a Bobble Cast Off Tutorial

Hoo are you?… and a Bobble Cast Off Tutorial 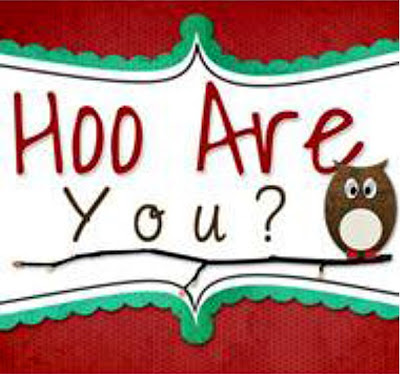 What a week we’ve had! It’s been really good albeit difficult, as Gerry has needed a lot of help with his fractured shoulder. However, it is healing nicely and I am glad to report that he has started moving his right arm a bit, all the while being back at work… He had another CT this week, with a 3D reconstruction to make sure that the fracture didn’t extend into the joint. It’s really quite amazing what modern medicine can do… (if any of you are interested I will upload a 3D reconstruction CT image to show you ), and I am endlessly grateful that almost any traumatic injury can be treated if therapy is started early enough…

I have had a good week and a sad week in the ICU. We are full (as usual), but this week saw some very sad situations.
Gerry was called to see a young boy who had tried to commit suicide, and although he tried everything possible to save the child’s life (including extreme measures), the child died. It has caused tremendous upset and sadness for us, as well as the hospital staff involved . We learned that his friend had committed suicide the evening before, and that there had been a pact between them to do so. It’s a desperately sad situation… On a more positive note, a sweet old lady who has been with us for over a month, and at one point critically ill, is ready to leave! She is now thoroughly irritated with being in ICU and scowls at us when we ask her how she’s feeling 🙂 (this is actually a good sign…patients who are critically sick don’t scowl at anything…)

On the knitting front…I have been designing a fair isle pattern, and hope to have it finished for show and tell next week 🙂 I am working on an African Flower Hexagon join-as-you-go Tutorial…hope to have it up soon 🙂

What did you get/give for Valentine’s Day?

I gave the girls some adorable soft toys , cow and horse little bags, and a cool muticoloured pen (you know the type…ten different coloured nibs in one…beats me but they loved them!) They made me an absolutely beautiful card with lovely tear jerking stuff written inside….
For Gerry, I organized to have an entry for an exclusive mountain bike race (unfortunately he will not be taking up the place 😉 ). Gerry bought me an antique amethyst ring.

Do you have a vacation planned in the next couple of months or in the summer?

Yes, we are going skiing in France in April.

What is the one thing you do to pamper yourself?

Have a back massage…

What sparks your interest in other people’s blogs?

I love to see a well laid out, clean looking blog. That’s the first thing that catches my eye.
Regular posting is also important…I may feel that I am getting to know someone, and then look forward to reading more, and boom!…no posts for weeks! I love creativity… so blogs that feature creative elements are always a draw. I love humour, and honesty and positive attitudes. I also like to hear something of the blogger’s life, their days, activities etc. And most importantly… a friendly disposition…

What kind of mood are you in today?

I am happy and incredibly grateful for the good in my life. That’s not to say that I don’t have some hard days, where maybe things aren’t easy or understandable, but I am simply thankful that my problems are small in comparison to what some people are experiencing. I am grateful for health, healthy children, a wonderful husband, precious friends and family, and a new hope for every day. Unlike a lot of people in Africa, I have choices and options and my freedom, and I recognise that these are indeed precious! 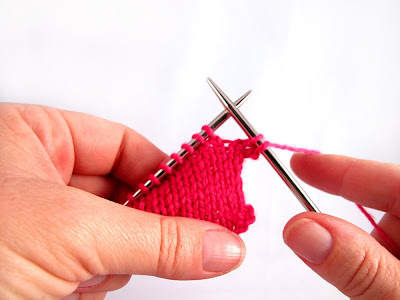 Right…ready to go? When you have reached the end of your project, and you are ready to cast off, proceed as follows…
Knit 2, cast off one stitch. 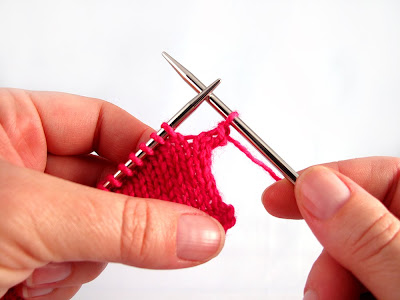 You have one st on the RHN. 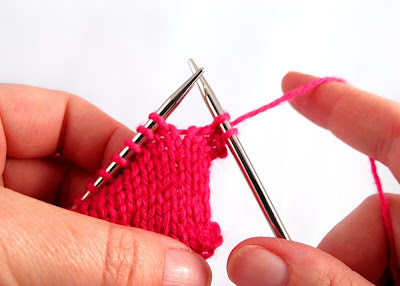 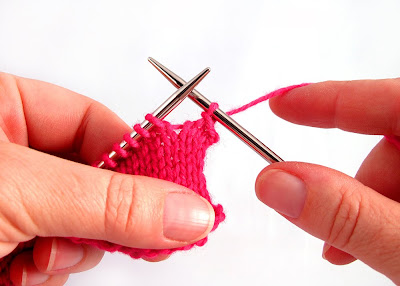 …and cast off a second stitch. 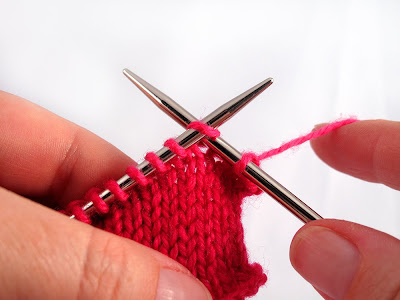 The next stitch will be the one that you make a bobble into. The bobble is made in exactly the same way as described in the Bobble Cast On Tutorial. 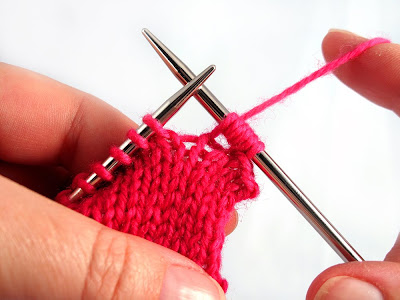 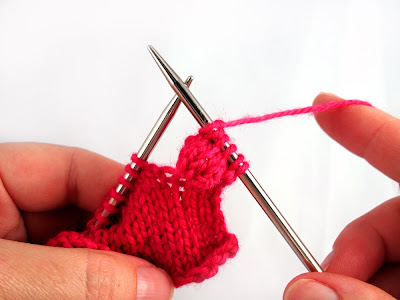 The bobble has been made, and you will now slip the stitches to finish the bobble (exactly as in the Bobble Cast On Tutorial). 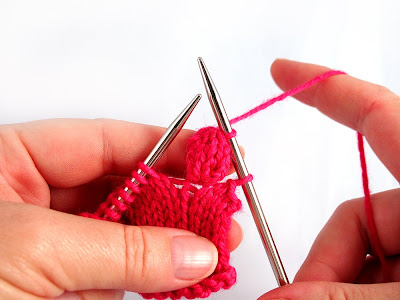 The bobble stitches have been slipped, you have 2 sts on your RHN. 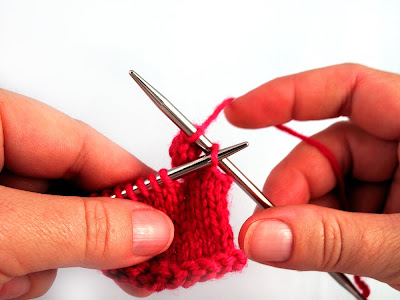 Cast off the right sided st on the RHN off (over the bobble st), as seen above. 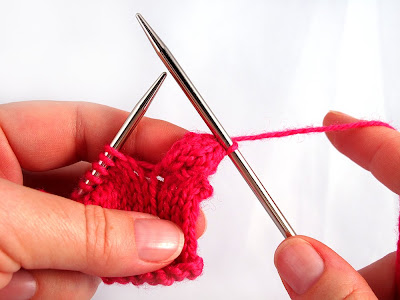 Above you have the bobble made and all sts cast off. 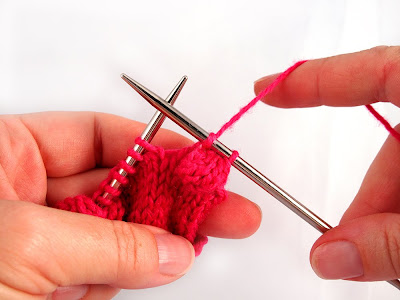 …next Knit a stitch…you have two sts on your RHN again. 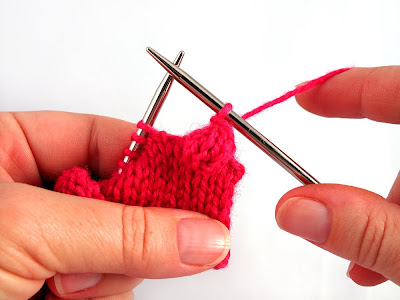 Cast it off. One stitch on RHN. Repeat this so that you have cast off 3 stitches including that of the single bobble stitch. Make a new bobble into the next stitch on your LHN. Repeat until the end of the row and all sts are cast off. 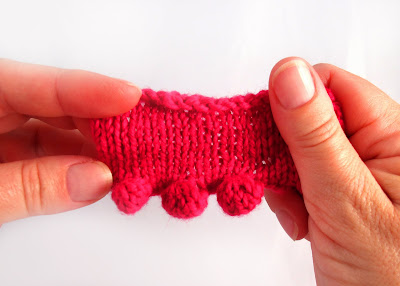 A small note:
In the picture above you can see that the first bobble is smaller than the other two. I found that for some reason, (even using the same yarn and needles ), I needed to add an extra Knit row and an extra Purl row to the bobble, in order to make it the same size as the bobble made in the Bobble Cast On. I am not sure if this is just me, but if you are making something that has two bobble edges, you may want to experiment with the bobble size of the cast off, so that both your bobble edges match. The bigger bobbles were made with these extra rows, and they are the same size as in the previous tutorial.

I would love to see your projects that have a bobble or picot edge…please upload them to the Friday Project Share post next week 🙂 I look forward to seeing everyone’s WIP/FO’s!

Have a good evening folks,
♥