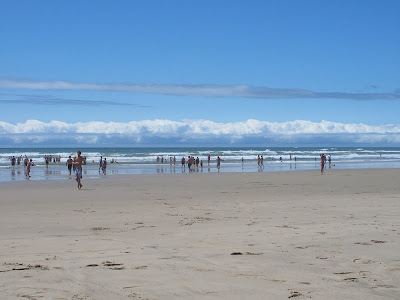 So…you may ask yourself….?Wild Coast….what is the Wild Coast? And what does that have to do with a sunny beach scene?
We are on holiday in an area on the East Coast of South Africa called the Wild Coast. This region is famous not only for it’s breathtaking natural beauty, but for its unpredictable and treacherous ocean. There are several natural landmarks that you may have heard of (eg Hole-in-the-Wall), but one of the aspects to the Wild Coast that I found fascinating, are the number of shipwrecks off its coast, including some famous ones. 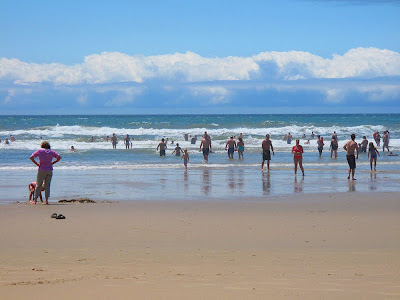 A few years ago, I read a book called “The Caliban Shore” by Stephen Taylor, which deeply affected me (truth be told, I was an emotional wreck for weeks afterwards). On the 4th of August 1782, a wooden hulled ship called the Grosvenor, struck rocks and sank off the Wild Coast in an area called Lwambazi. The initial toll was not as great as could be expected….only 14 of the 150 passengers drowned, with the rest reaching the shore. The book follows the subsequent events as told by two of the survivors (written accounts of course 😉 ) and after truck load of historical research by the author. One of the survivors was an 8 month pregnant woman. It was her story that had me in tears over many days. If you are easily upset, perhaps this book is not for you…but, certainly it is a worthy read, full of historical data and gives a very real account of why this area is called the “Wild” coast. The characters are really brought to life and the social norms and human behaviour in the 1700’s , make for thought provoking reading. I highly recommend it!
The mystery and legend surrounding the Grosvenor and her cargo , continued on for a long, long time, with rumours of gold and treasure sparking several treasure hunt expeditions! You can read about all of it in the same book, as well as find snippets here.
There are a couple of other famous shipwreck events, including that of the “disappeared-into-thin-air” SS Waratah…all fascinating reading. 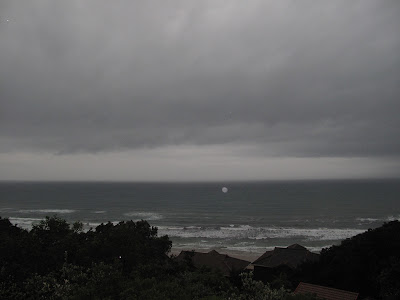 So, in light of this, on Christmas morning, we woke to find the ocean covered with mist and a fine dizzle falling….two hours later we were on the beach in perfect weather with sun and sand bright with summer. In the first photos you can see the heavy bank of cloud on the horizon…when we see something like that we know…watch out, something is coming! By the afternoon, we had what you see in the bottom photo…black clouds, a heavy oppressive atmosphere and a heck of a thunderstorm….the lightning struck an area in the village, and our lights went out and we had no power! It took 6 hours to sort out whatever it was that was fried by the lightning, so we spent the evening at Pete’s house (some of the houses in the area still had power, others not…go figure?). Earlier this year, a massive amount of damage was done to the East Coast when incredibly strong winds and rain, virtually washed away roads and flooded malls and homes….it really was dreadful.
In spite of these unpredictable events, it is the very uncontrollable nature of the area that I love…man still has to tread lightly and beware…nature is till the boss here!